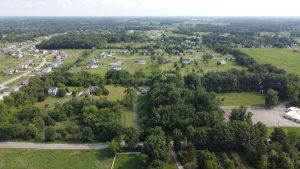 Very early in the recorded history of Dexter Township are found reports of several Indian villages. The first white settlers came from mainly New York. The first settlement was made in 1825, on the northeast fractional one-fourth of section 36, by two brothers and their families. Samuel W. Dexter purchased the east half of section 12 where the Dover Mills were later located.

The first town meeting of the original Dexter Township was held in the home of Judge Dexter, May 28, 1827.
Due to errors in surveying the township, the northern portions of sections contained less than three-quarters of the prescribed quota of land. The western area of the sections fell short by as much as fifty to sixty-five acres per section.

The early settler began farming as soon as he purchased his land. Wheat was the leading crop for some time, and nearly every farm produced some corn, barley, oats and clover.

Apples were grown in all parts of the township. The farms in the North Lake area succeeded in producing the best and greatest varieties of fruit of any part of the township.

Up to 1832 the entire western half of Washtenaw County, plus parts of Jackson and Livingston Counties, were governed by the original Township of Dexter. It was comprised of land that would later become Dexter, Scio, Webster, Lima, Freedom, Bridgewater, Manchester, Sharon, Sylvan, and Lyndon Townships.

A new Township Hall was erected at 6880 Dexter-Pinckney Road in 1970. The frame building used as a Town Hall for many years, located across from the first Catholic cemetery on Quigley Road at the corner of Dexter-Townhall Road, was then moved to a site on Territorial Road and converted into a residence.

The North Lake Methodist Episcopal Church was founded in 1836.

A Catholic Church was begun about 1840 and was located on the corner of Dexter Town Hall Road and Quigley Road in section 21 where the old Catholic cemetery can still be seen today. The members were very active until the church burned in 1854. It was then decided to rebuild within the Village of Dexter.

The original Thomas Birkett farm–section 1 through 12–included some 425 acres. Here Dover Mills was located and here he built his beautiful, large home. In later years, Birkett Newkirk encourages his grandfather, Thomas Birkett, to donate some of his land near Peach Mountain to the Y.M.C.A. Much later Peach Mountain was given to the State of Michigan with the understanding that the University Of Michigan would use this land for its observatory.

There are many lakes in Dexter Township. The principal lakes are: Silver, Half Moon, North Lake, West Lake, part of Four Mile lake, Portage and Base Lakes. Half Moon Lake was named because of the contours of its shore line. Base Lake received its name because the base line of the government survey ran through it. Four Mile Lake was so named because it is four miles, on a direct line, west of Dexter. Portage Lake was named because it was the place where the Indians coming up the Huron River portaged their canoes to some other body of water. Section 12 at the south end of Portage Lake was once the site of a city called “Saratoga of Michigan” after the famous resort in New York.